hitooligosaccharides (COSs) are hydrolyzed products of chitosan produced using enzymatic conversions, chemical methods or combinations of both. Unlike Chitosan they are readily soluble in water due to their shorter chain lengths and free amino groups in D-glucosamine units. The low viscosity and greater solubility of COSs at neutral pH have attracted the interest of many researchers to utilize chitosan in its oligosaccharides form.  As in the case of amino acids, which are building blocks of proteins, less than 100 units of glucosamine need to get connected to form COSs. Generally we talk about Low molecular weight chitosan (LMWC) when  n (number of mer units) >20, COSs when 2 < n<10 and Monomers, when n=1.

Chitosan can be converted to COSs either by acid hydrolysis or by enzymatic hydrolysis with glycosyl hydrolases like chitinases or chitosanases. Actually, the most common way to produce chitooligomers is through chemical treatment of chitosan using strong acids such as HNO2 and HCl. Depolymerization of chitosan by the use of HNO2 is a homogeneous reaction where the number of glycosidic bonds broken is stoichiometric to the amount of HNO2 used. Other method : Low-molecular-weight chitosans can be prepared using 85% phosphoric acid which result in decrease of viscosity by a factor of 3. As for enzymatic depolymerization of chitosan, it involves enzymes that hydrolyze the glycoside bonds between the sugars and are thus glycoside hydrolases. COSs produced enzymatically or chemically consist of a mixture of oligomers differing in degree of polymerization and pattern of N-acetylation. Different techniques for separation and purification of COSs have been used : gelfiltration, ultrafiltration, ion exchange and chromatography. Often, those techniques need to be combine  to obtain homogeneous COSs fractions. 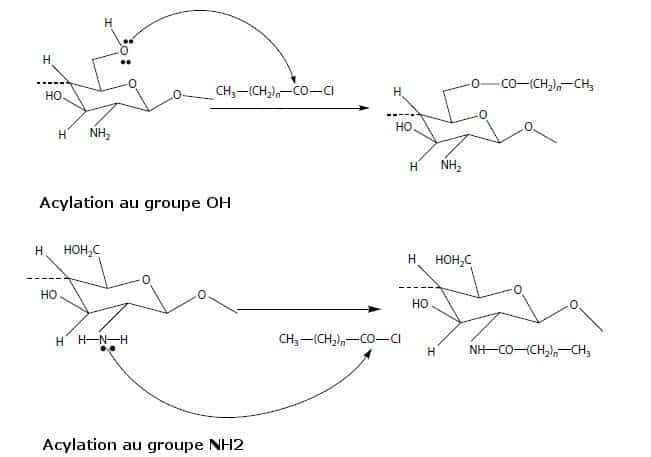